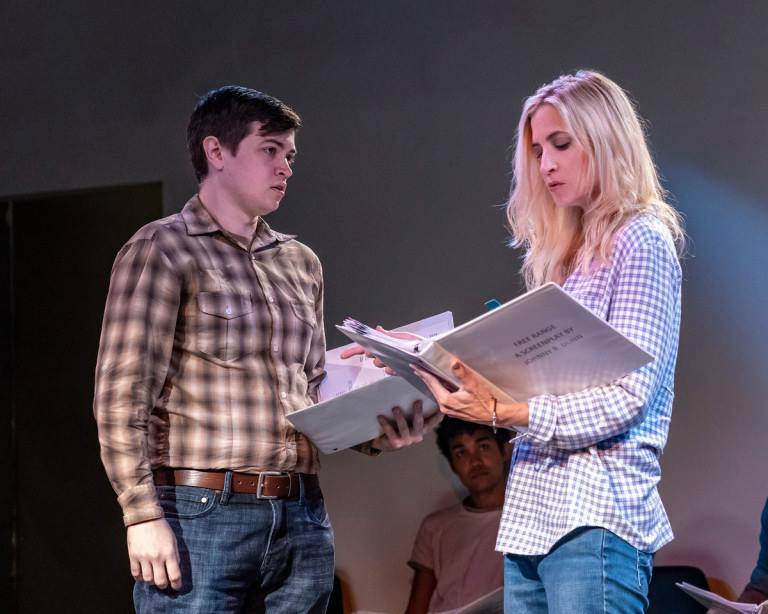 Christine Nagy deserves credit as Toby’s supportive but suffering mother. Delivering some of the piece’s morals and learning moments, Nagy gave stage to the cowpokes beautifully and then took it back for some very defining moments. W. Allen Wrede and Alain Laforest as two rodeo announcers were simply hilarious and Eric Hackler deserves a standing ovation for turning stage directions into a radio-style narration that could stand on its own.

Critics might call Dunn’s work formulaic. Without giving away plot or parcels, the same details can be found in the Bad News Bears, A League of Their Own, and even some portions of Star Wars and Shakespeare in Love. But what the author has created is a gay parable just as the others were parables of other oppressed or ridiculed people. Dunn has given us the next level of gay cinema. Boys in the Band tells us what it means to be in the closet; Angels in America about the fight to get out, and Free Range – now that we’re here and queer … give us our due! To put it in something as manly as a rodeo was a stroke of genius.

A comment made at the discussion afterward mentioned that this play was a rethinking of the Marlboro Man. Yup, it was. Well done, pardner!

Dear Matthew McConaughey … I think we have a vehicle for you.

Excerpts from The Road To Rage
Photo Credit: Tim Shahan