Big thanks to my alma mater, Montclair State University, for featuring me in their Fall 2013 magazine. Thank you Stacy Albanese, Class of ’08. 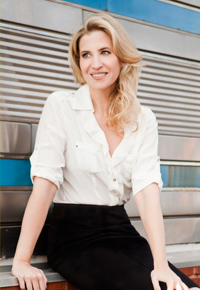 As a radio personality, actress and entertainer, Christine Nagy’s day starts at 3 a.m., when most people are still asleep. Currently the co-host of The Bronson and Christine Show weekday mornings on 106.7 Lite FM in New York, she arrives at the station by 4:30 a.m. and starts writing up the topics for that day’s show, which goes live at 5:30 and stays on the air until 9 a.m.

“I wake up to the news. I’m constantly listening to it, watching it and reading up on things so I can cover it on air,” she says. “I have a fantastic job. It’s a great feeling – feeling like we are all in it together…me, Bob (Bronson), our producer, Jamie Megargee, and the listeners,” she says. “It’s my goal to make sure the listeners feel like they’re part of the experience.”

Once off the air, she prepares recorded clips of the show for a national broadcast, conducts post-show interviews and prepares segments for upcoming shows. In addition to her radio show, she also works as a voice-over artist for commercials. Depending on the day, she wraps up her work at the studio around 11:30 a.m. If other jobs come up, she may work until 5 p.m.

While she enjoys every day, one of the highlights of her broadcasting career came when she worked at SiriusXM and met shock-jock Howard Stern. “He is a great interviewer. He asks the best questions and works with people’s emotions.”

When she’s not at the broadcast studio, she can often be found in a theater. Nagy’s acting career includes a two-year stint in the off-Broadway hit, Tony & Tina’s Wedding, as well as a turn as host for a comedy show at Carolines on Broadway.

A graduate of Montclair State’s Speech and Theatre program, Nagy recalls classmates and faculty members, including Patty Piroh, the current associate director of broadcast and digital media facilities, and Professor Howard Travis, who gave Nagy advice she repeated to students in 2008, when she received the College of the Arts Distinguished Alumni Award. “Look around the room. It sounds really simple, but it’s so true. Your classmates become your peers. It really applies to everyday life.”
“Montclair State is where I learned I love radio – I couldn’t ask for a better experience than that. It led to a career.” It only took Nagy a few months after graduation to land a full-time job in radio, and she has been in the industry ever since. Prior to joining Lite FM, Nagy was part of the morning show on Z100, Q104.3, and hosted shows for the Martha Stewart Channel on SiriusXM.

In the future, Nagy plans to continue to talk with listeners on the morning show and explore her passion for acting. “It’s truly my creative outlet, and I’d love to do more of it.” 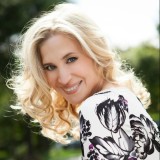 Christine Nagy is a Radio Personality, Actress, Animal Rights and charity supporter. She is currently the co-host of The Bronson and Christine Show, weekday mornings on 106.7 Lite-FM in New York. Christine is a National Board Member and NY Local Board Member of SAG-AFTRA, Christine is also a highly sought after voice-over artist for commercials and industrials.